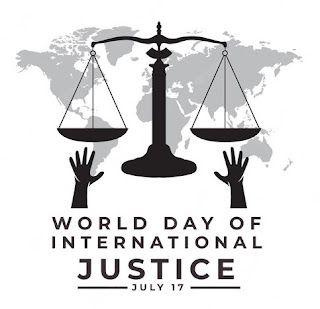 In modern times, reparation has been approved or paid to groups and people for the wrongs committed against them. Strangely enough Africans and people of African descent in the Diaspora have received no reparation for the atrocities committed against them by those who turned Africans into commodities for close to two millennia, invaded and occupied the continent, and colonised and neo-colonised Africans.

In 2022, we commemorated World Day for International Justice, July 17, with the theme "The Long Overdue Reparation."

In modern times, reparation has been approved or paid to Korean females used as "comfort women", Japanese Americans, those who are considered to be Jewish today and other groups for the wrongs committed against them.

Strangely enough Africans and people of African descent in the Diaspora have received no reparation for the atrocities committed against them.

This blatant discrimination is due to two main factors:

History has identified those involved: the Roman Catholic church, the church of England, financial institutions, educational institutions and the governments of Western Europe, the United States and the Arab world; that turned Africans into commodities for close to two millennia, invaded and occupied the continent, and colonised and neo-colonised Africans.

If those same institutions and governments can endorse or approve reparation to Korean females used as "comfort women", Japanese Americans, Kuwaitis, those who are considered to be Jewish today, and even to rich enslavers, surely, they can extend the same to Africans and people of African descent in the Diaspora.

Calls for Reparation: From 1919 to date

·  In 1919, Marcus Garvey (1887-1940), a Jamaican political activist, publisher, journalist, entrepreneur and orator who developed a ‘Back to Africa’ programme argued the case for reparations for the crimes of slavery and colonialism.

·    Under the 1988 constitution, following calls from Afro-Brazilian activists for recognition and reparation, Brazil gave Afro-Brazilians who live in Quilombos (settlements founded by Africans who resisted the slavery regime that prevailed in Brazil for over 300 years) a constitutional right to stay on their land. But 34 years later, the Brazilian government has yet to deliver all the land titles promised by the constitution.

Many Afro-Brazilians feel that Brazil's guarantee is as empty as the promise of 40 acres and a mule made by America to enslaved African-Americans.

According to the speakers, the crimes had not ended on Juneteenth 1865; they had just assumed different forms.

·  The first Pan-African Conference on Reparations for African Enslavement, Colonization, and Neo-Colonization was held in Abuja, Nigeria from April 27 to 29, 1993. The Conference was headed by Chief Moshood Kashimawo Olawale Abiola GCFR (1937-1998), also known as MKO Abiola, a Nigerian businessman, politician and philanthropist.

The Pan-African Conference on Reparations for African Enslavement, Colonization, and Neo-Colonization led to the Abuja Declaration, which calls on the international community to recognise that there is a unique and unprecedented moral debt owed to the African peoples which has yet to be paid. It also calls for the return of stolen goods, artifacts and other traditional treasuries, the cancellation of debt and the need to give the African peoples greater powers and representation in key decision-making bodies, notably a permanent African seat on the Security Council of the United Nations.

The Abuja Proclamation represented a key moment in the contemporary history of reparations efforts, and it acted as a catalyst revitalising reparation movements.

With the imprisonment and mysterious death of MKO Abiola the issue of reparation suffered a major setback. Fortunately, other organisations founded by people of African descent took up the task and have continued the Call for Reparation.

·   The Africa Reparations Movement (ARM UK) was set up by Guyanese Congressman Bernie Grant in December 1993 as a result of the Pan-African Conference on Reparations for African Enslavement, Colonization, and Neo-Colonization held in Nigeria in April 1993.

The aim of ARM UK was to seek reparation for the harm done to Africa and the African Diaspora through enslavement, colonisation, and racism. ARM UK organized events to raise awareness and demand for the return of artefacts stolen from Africa during colonial invasion.

ARM UK however ceased to operate in 2000 following the death of its President, Congressman Bernie Grant.

·   In 1999, the African World Reparations and Repatriation Truth Commission called for the West to pay $777 trillion to Africa within five years.

·  El Movimiento Panafricanista de España (MPE), Pan-African Movement of Spain in English, emerged in the mid-nineties and is actively involved in seeking reparation.

· Founded in 2001, le Mouvement International pour les Réparations (MIR) in Martinique, International Movement for Reparation in English, has been taking actions to obtain reparation for crimes against humanity.

MIR has also sued France seeking reparation for descendants of people of African descent in Martinique for crimes committed during the Slave Trade.

·   In 2003, President of Haiti, Jean-Bertrand Aristide demanded that France compensate Haiti for over $21 billion, the modern equivalent of the 90 million gold francs Haiti was forced to pay to after attaining its independence from France in 1804 through a revolution that lasted from 1791 to 1804.

In 2004, a lawsuit launched by Haiti to demand repayment of the money France had extorted from Haiti was abandoned when France backed the overthrow of the Haitian government.

·  In 2004, a coalition of Jamaican activists, including Rastafari members demanded that European nations which had participated in the Atlantic Slave Trade fund the resettlement of 500,000 Rastafari in Ethiopia (which they estimated to be 72.5 billion pounds sterling, or roughly, $150,000 USD per person).

·  From 2004, claims for reparation reappeared in the official documents of the African Union. In the Action Plan 2004-2007 of the Commission, approved by the Assembly during the Third Summit of the African Union (AU) from July 6-8, 2004, one of the anticipated events for 2005 was the debate on slavery in all African parliaments, with the aim of declaring it a crime against humanity and discussing the nature of reparation.

·  In his opening speech at the African Union Summit held in Khartoum, Sudan from January 16-24, 2006, Chairperson Alpha Oumar Konare, recalled that the duty to keep memory alive was a collective African struggle, which forces us to demand reparation, or in other words, the recognition of the crimes committed.

·   In 2007, President of Guyana, Bharrat Jagdeo formally called on European nations to pay reparation for the Slave Trade.

·    On September 23, 2009, in his speech at the 64th Session of the United Nations General Assembly in New York, President Muammar al-Gaddafi, President-in-turn of the African Union, declared that Africa deserved $777 trillion in compensation from the countries that colonised it and for resources and wealth stolen in the past.

Muammar al-Gaddafi also declared that colonisation should be punished and that the countries that harmed other peoples during the colonial era should pay compensation for the damage and suffering inflicted under their colonial rule.

·  In 2010, on the 125th anniversary of the infamous Berlin Conference during which European leaders met to divide Africa and arbitrarily draw up borders that exist to this day, representatives from many African countries in Berlin called for reparation for the colonial era.

“The arbitrary division of the continent among European states, which ignored African laws, culture, sovereignty and institutions, was a crime against humanity”, they said in a statement.

They called for the funding of monuments at historic sites, the return of land and other resources which had been stolen, the restitution of cultural treasures and recognition that colonialism and the crimes committed under it were crimes against humanity.

·     In 2011, Antigua and Barbuda called for reparation at the United Nations, saying "that segregation and violence against people of African descent had impaired their capacity for advancement as nations, communities and individuals".

In 2014, 15 Caribbean nations unveiled the "CARICOM Ten Point Plan for Reparatory Justice" which spelled out demands for reparations from Europe "...for the enduring suffering inflicted by the Atlantic slave trade".

Among these demands were formal apologies from all nations involved (as opposed to "statements of regret"), repatriation of displaced Africans to their homeland, programs to help Africans learn about and share their histories, and institutions to improve slavery descendants' literacy, physical health, and psychological health.

According to him, Isaac Royall Jr., who was the first endowed professor of law at Harvard, relied on enslaved persons on his plantation in Antigua while establishing Harvard Law School.

·    In 2022, calls for reparation by Africans and people of African descent throughout the Diaspora grew louder during the queen's platinum jubilee.

For in seven decades, the queen did not acknowledge the misdeeds of the empire for which she was the ceremonial figurehead until her death, by making reparation for the monarchy’s historical commitment to enslavement and Britain’s role in the Slave Trade.

·  In his speech on November 10, 2022 addressing the controversy surrounding the false charges of anti-semitism against Kyrie Irving and Ye, Minister Louis Farrakhan, Leader of the Religious movement, the Nation of Islam, stated that “reparation is what we deserve for the pain and anguish you have caused us to suffer”.

The Right to Reparation and Justice

In 2020, in an effort to remember the victims, - the tens of millions of Africans and Afro-descendants whose stories will never be told, who were denied their language, culture, family, identity and heritage, children, women and men who were degraded and made to feel inferior mentally, emotionally, physically and spiritually and whose remains are scattered across Africa and the Diaspora in unmarked graves - and honour their memory, we published a video titled Justice and Reparation.

The Justice and Reparation video features 51 resources in English, French and Portuguese by African, African-American, Afro-Brazilian, Guyanese, Martiniquan, Barbadian, Trinidadian, Afro-Iraqi historians, researchers, experts and writers addressing the nexus between racism, slavery and religion and advocating for justice and reparation for victims of the Arab-led slavery of Africans, the Transatlantic Slave Trade, colonialism and apartheid.

One thing is arguably clear: monetary compensation will not appease the pain, torture and suffering of our ancestors or the multi-generational trauma passed down through generations in families.

Similarly, no amount of money can fully heal the damage done by the Arab-led slavery of Africans, the Transatlantic Slave Trade, colonialism and apartheid but reparation is an important part of recognising and amending the injustice.

Stand Up for Your Right

Get up, stand up

Stand up for your right

Get up, stand up

Don't give up the fight

Despite obvious cynicism, obstacles and complexities, reparation is a human rights issue based on rock-solid legal ground and we must continue to demand reparation to address the historical injustice that was perpetrated against Africans and people of African descent throughout the Diaspora, and whose wounds remain to this day. #StandUpForYourRight #DontGiveUpTheFight

While attempting to mitigate the impact of engineered poverty on our beneficiaries through our programmes, we also consider it a matter of social justice to address the root causes of the problems of Africa and propose suitable and efficient solutions.

Email ThisBlogThis!Share to TwitterShare to FacebookShare to Pinterest
Labels: apartheid, Arab-led slavery of Africans, colonialism, Don't give up the fight, Justice and Reparation, Marcus Garvey, neocolonialism, Stand up for your right, the Transatlantic Slave Trade
Home
Subscribe to: Posts (Atom)